So my development laptop a trustworthy dv6535ep that is anything but robust with plastic all over the place, just had its last rites when the GPU failed for the second time. The symptoms were obvious, the computer booted through the BIOS and was crashing somewhere in the operating system WHILE the screen was off at all times, even with another screen connected to the VGA port.
Since the laptop was never subject of physical abuse, it was obvious that the GPU was needing a reflux. I do not have a reflux oven and using my baking oven was out of question. However, I do have a PID-controlled hot-air station so why not trying to salvage an already dead and old piece of equipment? 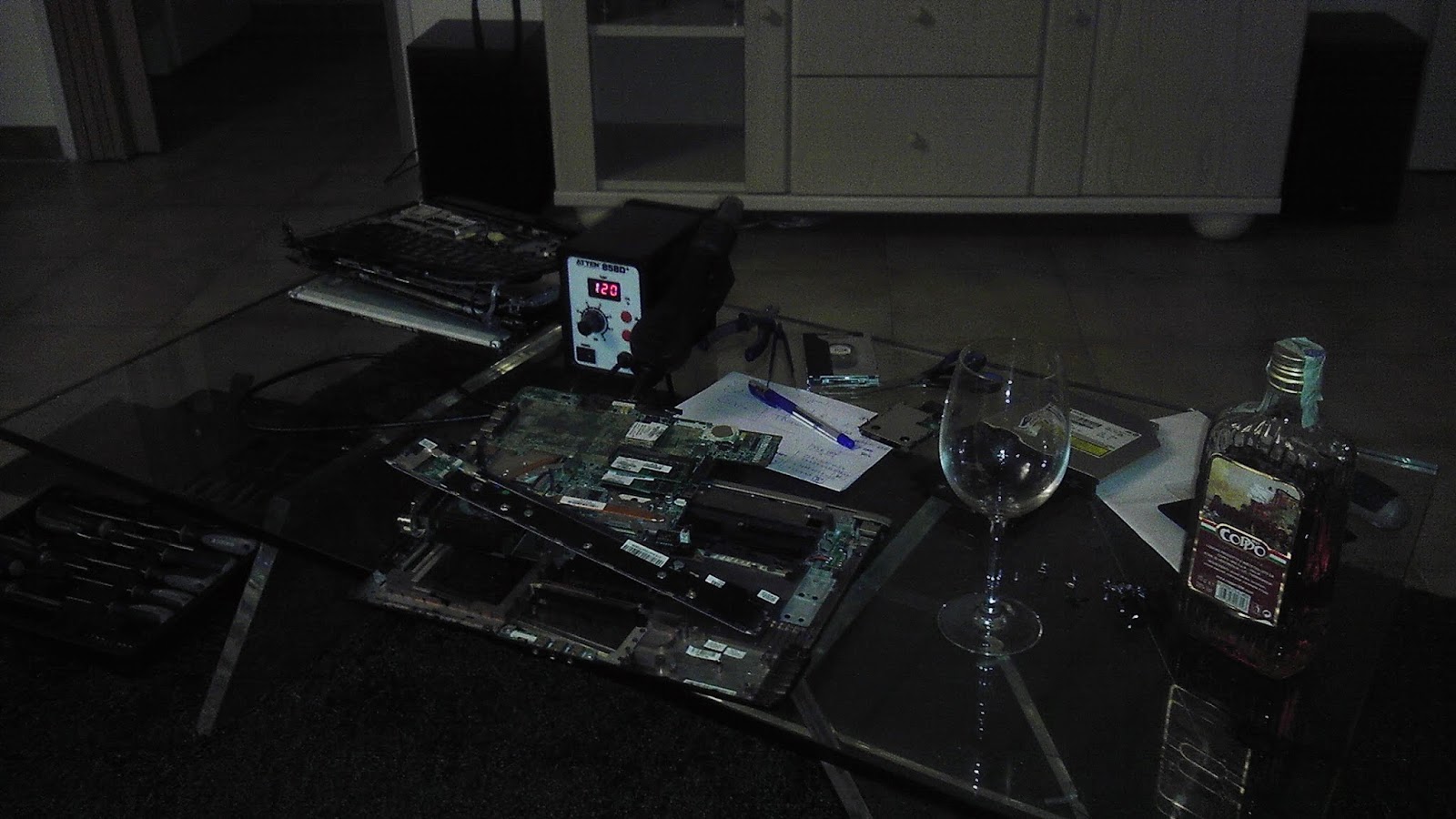 Disregarding my lack of a working-table, I disassembled the laptop in a very organized fashion. Then I covered everything in aluminium foil and left the GPU exposed. 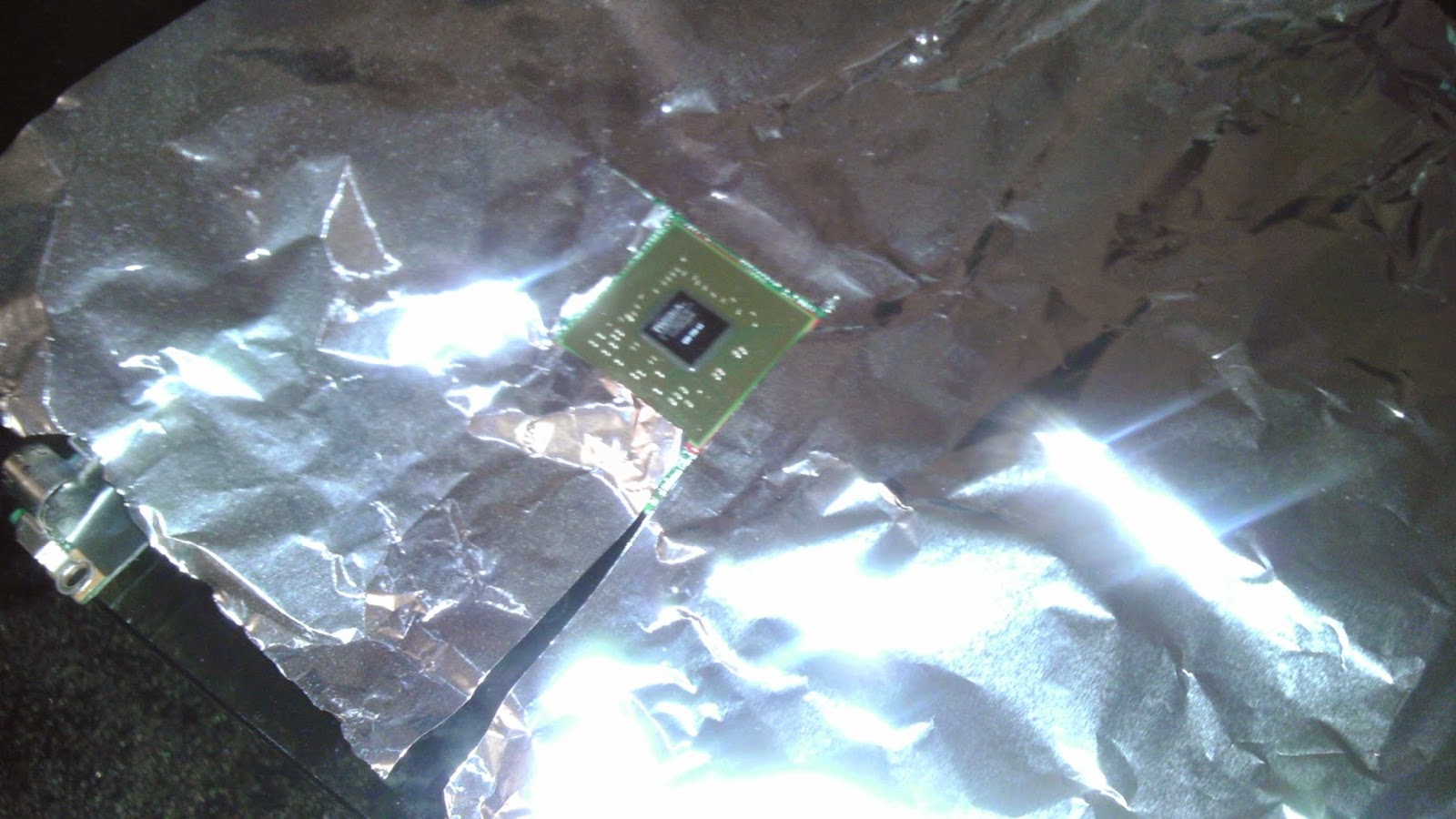 After that I slowly started increasing the temperature of the hot-air station until I saw the texture of the solderpads change - I believe this was around 380 deg Celsius. I left it cooking for 10 seconds and then slowly reduced the temperature again. After this operation was complete, the computer stayed cooling by itself for a few hours. Then I assembled the laptop in a minimal fashion just to check if I had video output - YES! 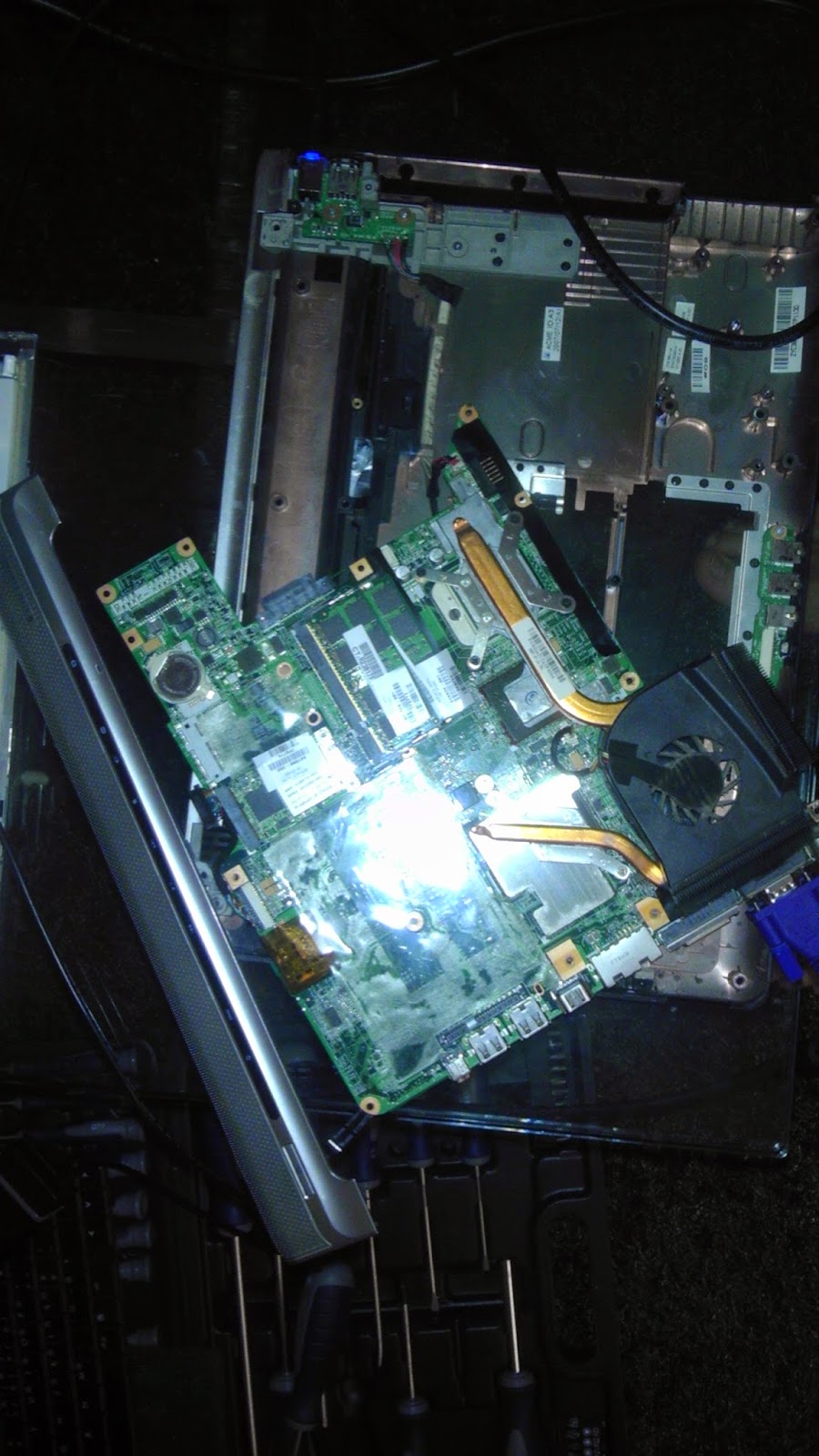 It did not last long though, after a few days there wasn't any video output again. I repeated the steps above but this time it didn't work. I guess this was the end of it.


Posted by Angelo Arrifano at 11:43 PM No comments:

The project is still going!

So today following the announcement that the Hackaday Prize contest is closing within the following 12 hours, I decided to submit the project to the contest and update the blog. Why not? Maybe I'll finally have some readers!

I haven't been allocating much time to the project since my last blog entry, however I do have some worthy updates.

I received a 15 inch touchscreen panel that I ordered from ebay, it came from Hong Kong and it took nearly a month to arrive. The packaging was a bit funny but .. hey, it arrived intact! 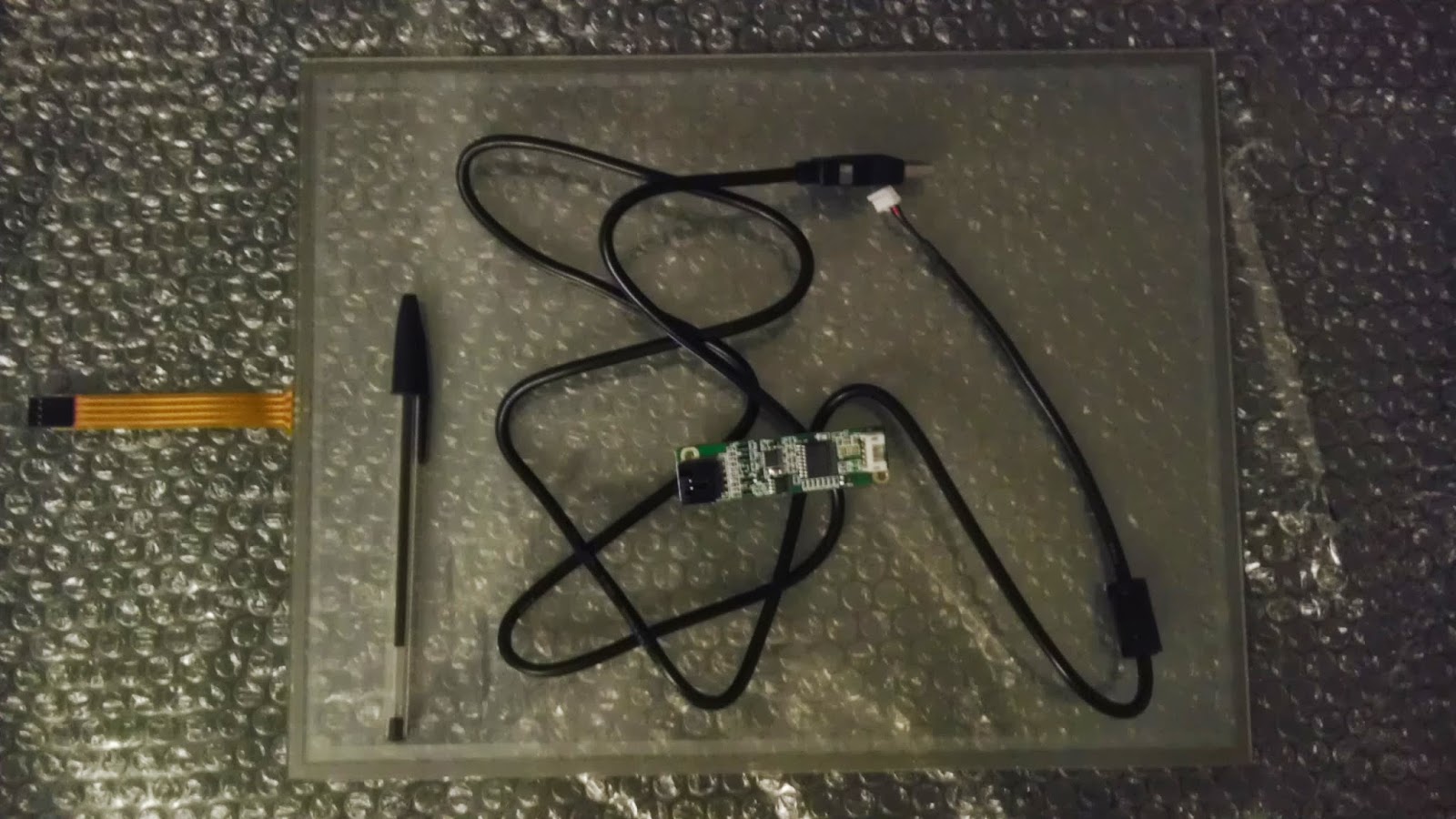 The touchscreen is detected in Linux as

and works using the USB touchscreen driver in the kernel (CONFIG_TOUCHSCREEN_USB_COMPOSITE). I'll need to check later how to make the touchscreen device available as a X11 input (tslib)?

I also studied a bit which MCU to use for the project. There are quite a few places comparing the most common development boards for hobbyists. I was aiming for the Beaglebone Black but it was out of stock in most stores around here, so I ended up buying a Raspberry Pi. There are some reports of people running pulseaudio and midi software on it, so it should fit my needs. The Raspberry Pi also has support for a multitude of output resolutions which is important for me since I'm using a 14'' screen. 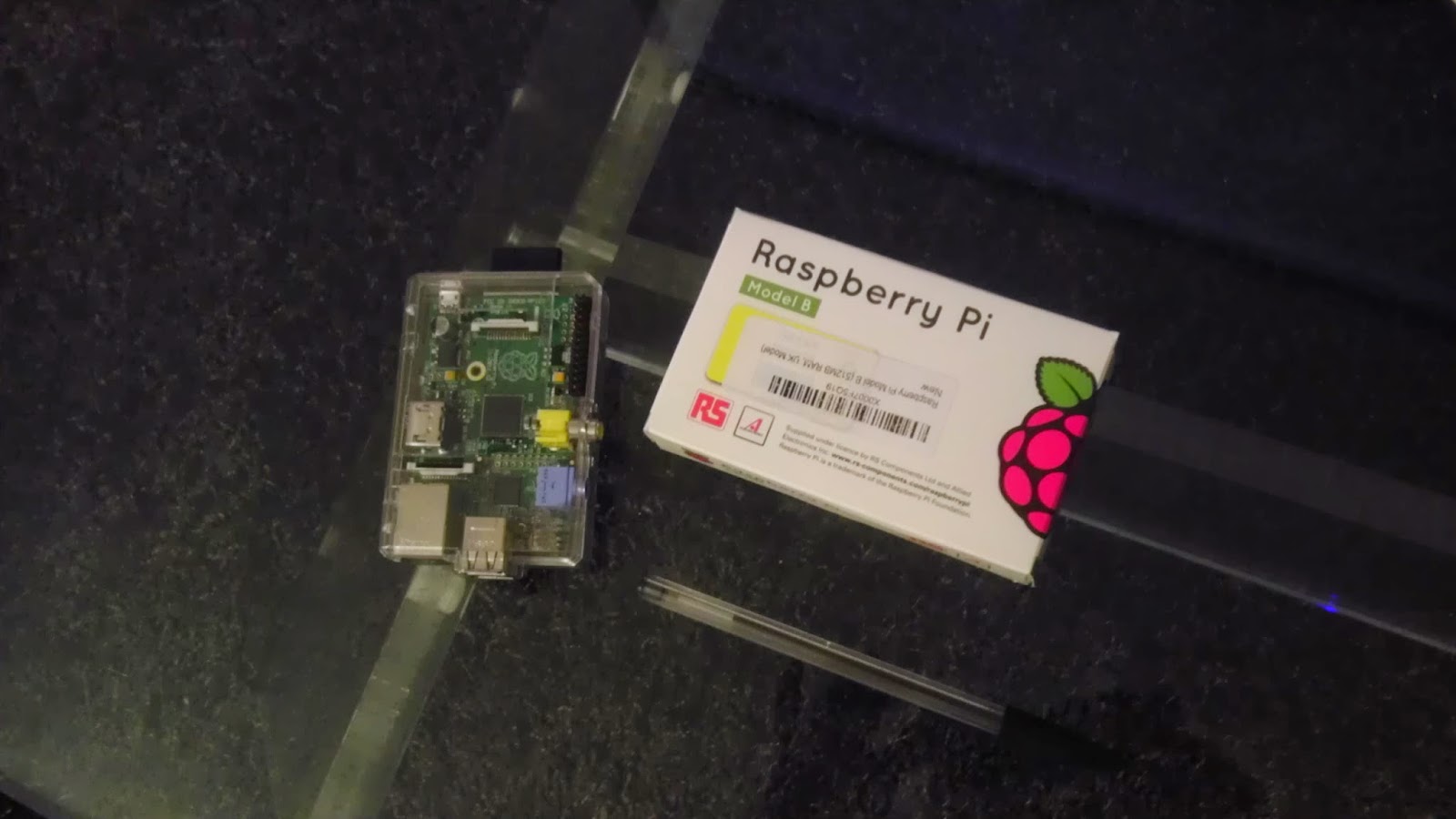 I would be already cross-compiling a Gentoo-based distribution for the Raspberry Pi if my laptop wasn't broken. After 5 years, my dv6535ep died with a burnt GPU (it is funny since I don't even game on it). I successfully brought it alive once using my hot air station but the GPU ended up failing again a few days later. Anyway, this is subject of another story!
So now I'm preparing the desktop for development since the laptop was my dev computer :'( I'm hoping in having more updates soon.

Posted by Angelo Arrifano at 11:20 PM No comments:

It has been quite a bad weather lately so this weekend I finally found myself the time at home to continue working in this little project. I received the power supply for the LCD controller quite some time ago so I had everything ready for a test run. 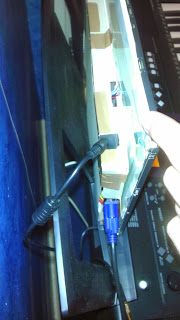 I made a small box out of cardboard to hold the LCD controller and cables and duct taped it to the rear of the LCD screen. It is not pretty, but it works. 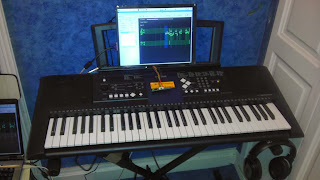 I put the screen into place, connected the cables, launched piano booster in the laptop and voilá! I played through a few MIDI songs to see how comfortable the system is and the truth is that I really liked it.There are a few problems though:


Now I'm going to dedicate the next few times for building a proper LCD frame out of an aluminium sheet. Let's see how it goes..
Posted by Angelo Arrifano at 9:16 PM No comments:

I got tired of waiting for the power supply and looked around the house for 12V power adapters, luckily I ended up finding one with enough amperage to power the LCD, it was being used by the Internet TV box. Before powering it up, I connected the LVDS cable from the controller to the LCD and checked the pins of the connector with a multimeter. I verified that all VCC pins were not shorting with GND pins or any of the data/control pins. I also checked that GND pins were connected together and the same for VCC - things looked good. Then I replaced the inverter coming with the LCD with the inverter packaged with the LCD controller. I hooked the power supply and a "no signal" box immediately appeared in the screen. Since it appeared to be working, I glued the inverter to the back of the LCD to make it safer, avoiding getting zapped and avoiding accidental shorts with the metallic frame. I finally connected the VGA cable to the laptop and voilà! It is working. 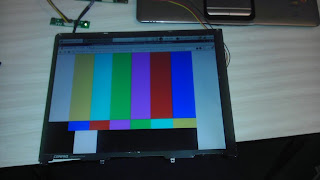 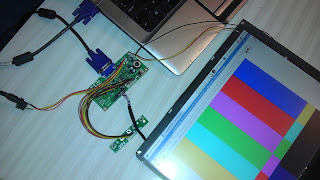 I now need to build a decent frame for the screen to hold all the electronics safely inside. The inverter and controller board are quite thicker than the current (laptop-style) frame, so it will not be possible to use it. I will have to figure something out.. If any of you is reading, I would love some ideas..


Posted by Angelo Arrifano at 12:36 AM No comments:

Today I just received by mail the RTMC1B LVDS LCD controller kit. that I bought from ebay. Given that I bought this nearly a week ago and is shipping from Hong Kong, it arrived pretty fast! 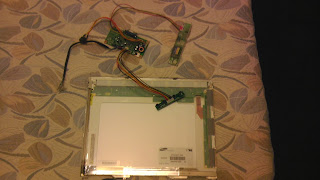 You can see the LCD + controller above. They are not connected and powered (still waiting for the power supply) yet. I am not quite sure about the pinout since the proprietary connector that came with the laptop screen and the LCD controller's connector don't quite match. Here are individual pictures of each: 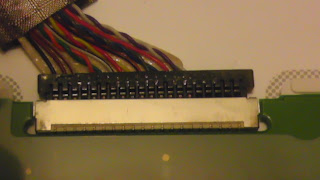 This is the connector (picture above) of the proprietary cable that came with the laptop screen. 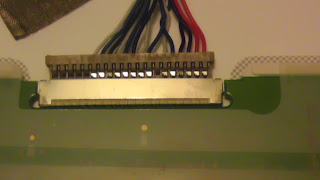 I also managed to take a picture of the LCD model which I will leave here just for reference: 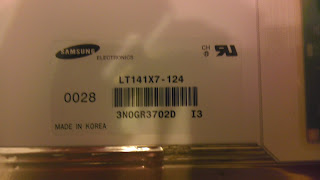 Posted by Angelo Arrifano at 12:34 AM No comments:

It all started when a few months ago a friend of mine gave me a laptop LCD taken from an old Compaq Armada M700. The screen is 14.1'' and is in good shape (except the metallic bezel which suffered a bit while I took it apart): 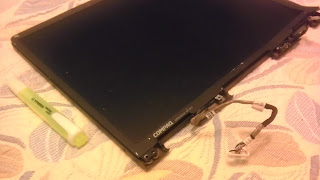 Inside the laptop bezel there is still the inverter for the backlight and a Samsung LT141X7-124 TFT LCD. For some weeks I didn't have a clue what to do with it.

Mmm.. It looks good there.

One day when I was connecting the laptop to the piano keyboard for transferring some MIDI songs by USB, I realized that the LCD screen looked quite nice on top of the piano sheet holder. I wouldn't have to print sheet music anymore and could use Rosegarden to display music scores in realtime with the MIDI music - that would be awesome! 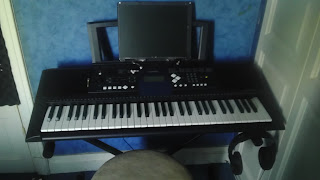 After looking a bit through ebay, I arrived to the following listing about an LCD controller board with inverter (even though I didn't need one) and VGA input.around $29 + free shipping. This would allow me to connect the LCD screen to e.g. my laptop. I messaged the seller asking if the screen model was indeed supported which he replied positively. He also added that he would flash the controller board with the proper firmware for my LCD model. I also ordered this power supply for the LCD controller, for around $7.

Now I'm waiting for the LCD controller board and power supply to arrive, it should take a few weeks. Then the plan will be: There is a lot more planned but for now that's all :) Feel free to leave me a message with suggestions and ideas.
Posted by Angelo Arrifano at 12:30 AM No comments:

Angelo Arrifano
Computer enthusiast in Linux and opensource. Lately he has been learning a thing or two about music and MIDI.

Blogs of my friends..